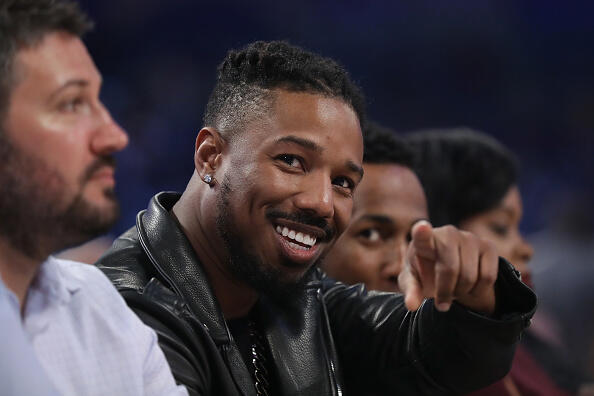 We had a great time at The Philadelphia Music Alliance’s Music Walk Of Fame ceremonies. Go to my Patty TV page and you’ll see LaBelle (Patti LaBelle, Sarah Dash, and Nona Hendryx), Sister Sledge and Jill Scott. Check out our videos on the wdasfm.com page and it’s on the Patty TV section. And, stay on wdasfm.com and see Tony Brown’s 45th anniversary in radio party pictures, happy anniversary Tony, a.k.a. Mr. Quiet Storm.

Oscar & Emmy Winner Viola Davis and Comedian/Writer/Producer Larry Wilmore are teaming up as producers for the sitcom Black Don’t Crack. It’s being called a Black Golden Girls. Three sorority sisters have been out of touch since their college days, but life’s challenges bring the women back together. Writer/Producer Regina Y. Hicks (Sister, Sister; Girlfriends) and Davis’ husband and producing partner Julius Tennon round out the team. The show is part of Davis’ and Wilmore’s separate development deals with ABC. No debut date as of yet.

Chadwick Boseman, Kate Hudson and Sterling K. Brown star in Marshall. The movie chronicles an early law case of the late Thurgood Marshall before his landmark arguments that led to school desegregation in Brown vs. Board Of Education, and before he was appointed America’s first African American Supreme Court Justice. Marshall opens in theaters Friday, October 13th.

Speaking of Chadwick Boseman, his co-star in big screen adaption of Marvel Comics’ Black Panther, Michael B. Jordan, has another comic book project lined up. Jordan will be an executive producer on Raising Dion for Netflix. Based on the comic book story of an African American widow who discovers her young son has superpowers. Jordan will also appear occasionally as the boy’s father and the widower’s late husband. Netflix has given Raising Dion a 10-episode order. At press time, no streaming date has been announced yet. Meanwhile, look for Jordan in Marvel Comics Black Panther on February 16th, 2018.

Denzel has changed his look…..again!! The two-time Oscar winner has a new movie called Roman J. Israel, Esq. He plays a lawyer who’s an advocate for the people, but his throwback style is something between a militant and Don Cornelius on the 1970’s edition of Soul Train. When “Israel” wins, he lets others take the credit. Colin Farrell and Carmen Ejogo co-star. Roman J. Israel, Esq. opens November 3rd.

Comedian Actor JB Smoove has a lot going on. First, he returns with Larry David to HBO for the 9th season of Curb Your Enthusiasm this Sunday October 1st. JB also has a new “Leon Black” book coming out. Look for The Book Of Leon: Philosophy Of A Fool to be available on line and in stores October 10th.

At the movies this week, Idris Elba teams up with Kate Winslet (“Titanic”) for The Mountain Between Us. Elba plays a doctor and Winslet, a journalist. Circumstances have them both taking a private plane that crashes, killing the pilot (Beau Bridges) and leaving the doctor and journalist to battle the elements to get back to civilization. The Mountain Between Us opens in theaters this Friday.

Bruno Mars has shot his performance at the legendary Apollo Theater in Harlem for his upcoming TV special. The special will be a mix of performances and interviews. The 31-year old, five-time Grammy winner has already released a picture of his performing on top of the legendary Apollo marquee. Bruno Mars: 24K Magic Live at the Apollo will air Wednesday, November 29th on CBS.

Disney Actress Zendaya is on the cover of Glamour. She’s got a big photo shoot and an interview with Black-ish Actress Yara Shahidi. Zendaya also confirmed this is her last season of KC Undercover. The 21-year old WOKE actress revealed when her Disney show was being put together, she was insistent on having an African American family. She knew diversity was extremely important for viewers. Zendaya is currently making the media rounds promoting ways to close the digital divide, which are efforts to see to it that families that can’t afford computer technology can still have access and resources.

Jennifer Hudson is on the cover of Cosmopolitan. The newest judge and mentor on NBC’s The Voice talks about her life. How she likes being a judge, and what it was like to work with co-stars like Beyoncé. The Voice airs Mondays and Tuesdays at 8pm on NBC.

Singer/Songwriter/Reality Star Kandi Burruss (Xscape) is on the cover of October’s Essence magazine.

Rihanna is on the cover of Elle, and the critics are raving over Rihanna’s new makeup line Fenty. This is a good time for Ri Ri. Next year, she’ll be a co-star of Ocean’s Eight, a female take on the Ocean’s Eleven movie franchise.  Rihanna will also join the panel at Vogue’s first annual Forces Of Fashion Conference on October 11th in New York City.

Tracee Ellis Ross is on the cover of W magazine and channels her mom, Diana Ross, in her full Diva legacy. Ross also pays tribute to her mom in the interview.

Ross also shares a cover with her Black-ish leading man, Anthony Anderson, on Ebony’s September issue, and Black-ish has returned to ABC for its fourth season with a new time slot, Tuesdays at 9pm.

Actress Meghan Markle is the talk of Hollywood and England as she graces the cover of the latest issue of Vanity Fair. The 36-year old star of the USA series Suits discusses her acting career, her bi-racial background and declares that she and England’s favorite eligible bachelor Prince Harry, 33, are in love.

This Saturday, October 7th – The Spinners and Little Anthony & The Imperials in concert at The Keswick Theater in Glenside, Pa. and for more information log onto keswicktheatre.com

This Sunday, October 8th – Incognito in concert at The Keswick Theater in Glenside, Pa. and for more information log onto keswicktheatre.com