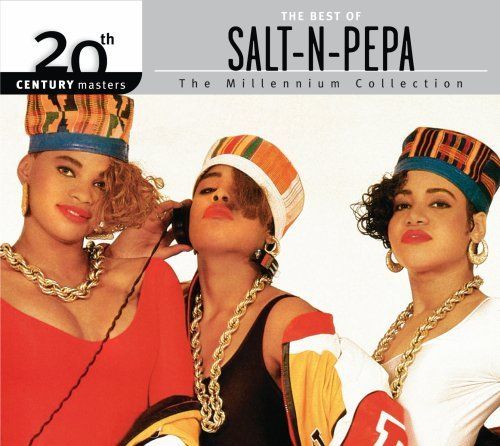 Salt N Pepa’s Sandra Denton (Pepa) may have to go from rapping Whatta Man to None Of Your Business. Why? It’s because her current boyfriend, whom she’s been featuring on her social media, is reportedly still married with baby number two on the way with his wife. Pepa recently posted her picture with her man Aundre Dean at the Kentucky Derby and branded him her Man Crush Monday (MCM). Dean is an ex-college football star and aspiring rapper. Problem is when Dean’s wife, Channel Jordyn, saw the postings of her husband and took to social media herself. Among other things Channel brought up missed visitation, missed child support and said Dean’s problems had to do with running around with a has been senior citizen celebrity. OUCH!!! Pepa has since taken down those posts. Hmmmmmmmmmm!

In more Salt –N-Pepa news, the ladies will reunite with En Vogue at The Billboard Music Awards May 20th. Back in 1994, the two groups joined forces for the platinum selling, top 5 hit Whatta Man. Salt-N-Pepa are being honored for their 30th anniversary of being the first female rap group to hit Billboard’s top 40 chart with Push It. Meanwhile, En Vogue is also enjoying new attention. The veteran group has just released new music and video for their Ne-Yo written new single Rocket. Meanwhile, others set to perform at The Billboard Music Awards are John Legend, Jennifer Lopez, Christina Aguilera, Demi Lovato and Janet Jackson, who’ll be receiving The Icon Award. The Billboard Music Awards with Host Kelly Clarkson airs Sunday May 20th at 8pm on NBC.

Chadwick Boseman is the man with two hits at the box office at the same time, but he is also returning to his roots this weekend at Howard University. Boseman, whose Black Panther character is in his own movie and the latest Avengers installment, is also an alumnus of the legendary HBCU. He’s set to speak at this Saturday’s graduation ceremony as commencement speaker. Boseman is also co-producing the big screen adaption of the life story of African American NASA Astrophysicist Hakeem Olusyi. No word yet weather the Black Panther star will appear in the film as well.

Speaking of Black Panther actors, HBO will premiere the uber-busy Actor Michael B. Jordan’s latest project. Fahrenheit 451 is based the Ray Bradbury novel about a society that bands books and the so called firemen charged with burning them. Jordan, who co-executive produced the project, plays a fireman whose conscious is challenged while burning books. It’s huge time for Jordan. He’s in the midst of filming Creed II in the city of Philadelphia. He even had time to respond to one Temple University student’s request for an impromptu photo shoot near campus where filming took place. Jordan is also on the cover of the May issue of Men’s Health magazine. And, Fahrenheit 451 premieres on HBO Saturday, May 19th at 8pm.

In more Michael B. Jordan news, he had a sit down with Acting Icon Denzel Washington and the New York Times. The two actors exchanged compliments, acting approaches and life lessons they’ve both been picking up along the way. Washington just completed a successful return to Broadway in The Iceman Cometh, not to be confused with the 1968 classic Jerry Butler-Gamble & Huff album… Hey Western Union Man! (smile). Washington is set to reprise his role as “Robert McCall” in The Equalizer II coming to the big screen July 20th.

Baby news for some of our favorites: Congratulations to Actress Tia Mowry (Sister, Sister; The Game). She and her husband Actor Cory Hardrict (American Sniper; Gran Torino; The Oath) welcomed their second child, a daughter, who joins the couple’s six-year old son Cree.   Congratulations also go out to former American Idol Champion Jordan Sparks. She and her husband, Dana Isaiah Thomas, welcomed son Dana, Jr. Sparks delivered at the Natural Birth Center & Women’s Wellness in L.A. and her husband Dana and Spark’s midwife actually caught baby Dana during delivery. All are doing well.

Mel B is on a roll. Former Spice Girl Melanie Brown is fielding rumors about not only reuniting with her former bandmates for a tour, but also performing this month at the wedding Meghan Markle and Prince Harry. Now, Mel B has signed a book deal and is speaking of her life as a mom. The romance department hasn’t always been great for the 42-year old. Despite that, she told a British talk show her children were made with a lot of love, and she wouldn’t talk bad about any of their fathers. The Spice Girl has three daughters: a 19-year old with ex-husband Jimmy Gulzar, an 11-year old with ex-boyfriend Eddie Murphy and a 6-year old with ex-husband Stephen Belafonte. The custody battle with Belafonte continues. Meanwhile, Mel returns to TV in America’s Got Talent with fellow Judges Simon Cowell, Howie Mandel, Heidi Klum and Host Tyra Banks. America’s Got Talent has its season premiere Tuesday, May 29th at 8pm on NBC.

Tiffany Haddish is everywhere. The comedienne and actress walked the carpet at The Met Ball, she’s making a filmed cameo appearance for Taylor’s Swift’s latest tour and she has signed a deal with Netflix that will include her starring in the animated series Tuca & Bertie. Haddish will also be the first African American woman to host The MTV Movie & TV Awards Monday, June 18th at 9pm. Haddish and Tracy Morgan’s series The Last OG has been renewed for a second season by TBS. And, Haddish has two movies on the horizon. First up she co-stars with NBA Champ Kyrie Irving, Shaquille O’Neal, Reggie Miller, Chris Weber, Lisa Leslie and Erica Ash in Uncle Drew, based on Irving’s Pepsi commercial character, hitting theaters June 29th. Then Haddish co-stars with fellow Comedian Kevin Hart in Night School coming to theaters September 28th.

At the movies this week, Gabrielle Union co-produces and stars in the thriller Breaking In. She’s a mom who must save her son and daughter being held hostage by men looking for money in the weekend home in which they’re staying. Union also opened up about burying a 17-year old….let’s call it angst….with Jada Pinkett Smith. The ladies contribute the problem to others whispering in their ears about how one feels about the other. Union says she and Pinkett Smith, whose husbands (Dwyane Wade and Will Smith) are friends, just got use to avoiding each other. Union, who’s on this month’s feature and cover for Ebony magazine’s travel issue, also signed first look deal with Sony. The actress has a two-year pact which covers TV, cable and digital projects for Sony TV. Union is also filming the pilot to the Bad Boys movie spinoff L.A.’s Finest with Jessica Alba.

Kerry Washington is on the cover Essence magazine’s 100 Woke women.

Meghan Markle and Prince Harry are on the cover of Vanity Fair as their May 19th wedding date draws closer.

This Friday, May 11th – The 10th Anniversary Of Platinum Shows’ Mother’s Day Music Festival begins with the Friday concert starring Singers Joe and Stokley (from Mint Condition) kick things off Friday, May 11th at Caesar’s Palace in Atlantic City. For Ticket information log onto ppshows.com.

This Saturday, May 12th – The 10th Anniversary Of Platinum Shows’ Mother’s Day Music Festival with the Saturday concert starring Maxwell, Gladys Knight and Vivian Green at the Boardwalk Hall in Atlantic City. For Ticket information log onto ppshows.com.

This Sunday, May 13th – The 10th Anniversary Of Platinum Shows’ Mother’s Day Music Festival concludes with the Sunday concert starring The Whispers/ L.J. Reynolds & The Dramatics/ The Intruders at The Tropicana in Atlantic City. For Ticket information log onto ppshows.com.

Friday, July 13th – Lauryn Hill and the 20th anniversary of The Miseducation Of Lauryn Hill tour at Penns Landing’s Festival Pier. Log on to ticketmaster.com for more information.